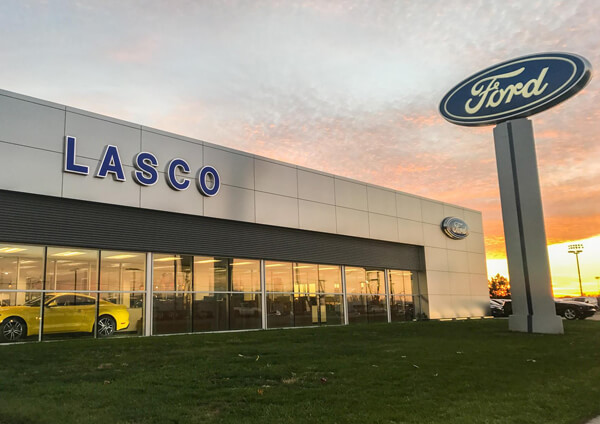 Lasco Ford hits the $1.3 million mark after the first year with RevolutionParts

Lasco Ford has met and exceeded their high goals of $1 million in parts sales after just a year and a half on the platform. From a dusty computer in a back room to an office of five people working on online parts sales, Lasco Ford has seen growing success in the world of eCommerce thanks to hard work and guidance from RevolutionParts.

“I am not sure where we would be without Revolution. Many of the support staff I consider colleagues, business partners, and friends. We hope to be a part of the Revolution family for years to come, sharing each other’s knowledge and success along the way. “

Austin Schillman, online sales manager at Lasco Ford, remembers when his boss approached him about the idea of selling parts online.

“My boss Dave Brooks has been in the industry for quite a while and came to me with the idea of going online for parts sales. He gave me the tools I needed and pointed me in the right direction to be successful.”

Austin hadn’t had any previous experience selling parts online, but he ran with it. He says it was online reviews and advertisements combined with word-of-mouth that brought their dealership to choosing RevolutionParts as their eCommerce solution.

“Many guys at the dealership had heard good things about Revolution,” he elaborates. “There’s a big network of dealers that parts managers are involved in, and they talk.”

After deciding to jump into the world of online parts sales, Austin says setting up the different web stores was easy.

“[I like] the entire platform in general. It doesn’t matter if you’re new to the system or eCommerce selling. The features are user-friendly.”

Specifically, Austin said the messaging system on the platform allows users to easily organize communication between channels like eBay and Amazon. Products and listings are easy to edit, allowing you to change details for one single item across several stores. This saves him a lot of time.

While the features are easy to use and understand, Austin remarked how the support team is always available to address questions or concerns along the way.

“If there’s a bug that comes up, the support team immediately addresses the issue. They’re quick, upfront, and helpful,” he says. “You can tell the company really cares about customer success and want you to grow.”

“With guidance from Revolution and some other experienced veterans in the industry, we quickly found out what we needed to do to be successful. With a lot of hard work and dedication over the first 6 months to a year we finally began to see a bit of success.”

Austin explains that their first-year goal was to get total sales to hit a million. They reached the number – and then some – hitting the $1.3 million mark after the first year.

The desire to grow and expand hasn’t stopped. “Once our system was getting closer to being perfected a little over a year after startup, we had to find new ways to continue evolving,” said Austin. “In an industry that is constantly changing one must change with it or allow it to change without (them). We set goals to beat the past, compete with the present, and prepare for the future.”

He explained that Revolution supplies all the tools for a dealership to be successful – allowing you to tweak and customize features and get as involved as you want to be. He also reflected on how many updates and improvements the platform has seen in just the year and half his team has been with it.

With the emphasis on growing business, having a growing and constantly improving platform has allowed Austin and the team at Lasco to find success – and given them a desire to strive for more.

“I am not sure where we would be without Revolution. Many of the support staff I consider colleagues, business partners, and friends. We hope to be a part of the Revolution family for years to come, sharing each other’s knowledge and success along the way. “